The Shahnameh: a Literary Masterpiece

The Shahnameh is the longest poem ever written by a single author, but length can hardly account for its enduring fame. Ferdowsi’s role in the formation of the Persian language and literary culture is similar to that of Goethe for the Germans, of Pushkin for the Russians, or of Shakespeare for the English-speaking world.

Ferdowsi was neither the first to write the history of the Iranian kings nor the first to compose poetry in the New Persian language. A generation or two before him, Rudaki (d. 940), the great court poet of the Samanid Empire in Transoxiana, had already raised Persian verse to the prestigious levels of Arabic. The earliest accounts of Iranian history in prose or verse written in the Middle Persian language (Pahlavi) were from the period of the Sasanians (224–642), who ruled Iran until the Arab conquest. Ferdowsi would have known ‘The Book of Kings’ (Khwaday-namag), which was compiled at the time of the Sasanian king Khosrow II Parviz (591–628) and was used for the compendium of chronicles completed in 957 at the request of Abu Mansur Mohammad b. ‘Abd al-Razzaq, the governor of Ferdowsi’s native Tus. One of the first prose versions of the Shahnameh was compiled by Abu’l-Mo’ayyad al-Balkhi in the first half of the tenth century, while Ferdowsi’s immediate predecessor, the famous poet Abu Mansur Daqiqi (c.935– c.976), wrote the first versified version of the Shahnameh in New Persian. But it was Ferdowsi’s Shahnameh that re-told the story of the Persian kings in an unforgettable way, solidified the authority of the Persian language as a literary medium, and kept alive the knowledge of Iran’s ancient glory, political ethics and cultural identity.

Since the Arab conquest of Iran in the seventh century, the Persian-speaking world was dominated by Arabic, which was of a different linguistic origin – Semitic as opposed to Indo-European. As an educated aristocrat and a Muslim, Ferdowsi would have known enough Arabic to read and understand the Qur’an. But his choice of vocabulary for the Shahnameh kept the number of Arabic words to an absolute minimum. The metre he chose, motaqareb, is close to the Persian syllabic system. Each verse is independent and the sense does not normally run on into the next verse. Ferdowsi’s style is deliberately archaic, devoid of the ornate language and technical sophistication of his famous contemporaries at Sultan Mahmud’s fashionable court. The vocabulary, the metre, the semantics of the verses, and the relative simplicity of Ferdowsi’s diction suited the epic genre and facilitated the memorization of lengthy passages. Ferdowsi’s claim to fame rests largely on his deliberate invigoration of Persian as a literary medium, thus preserving not only the history of the Iranian people, but also the language in which it was recorded. 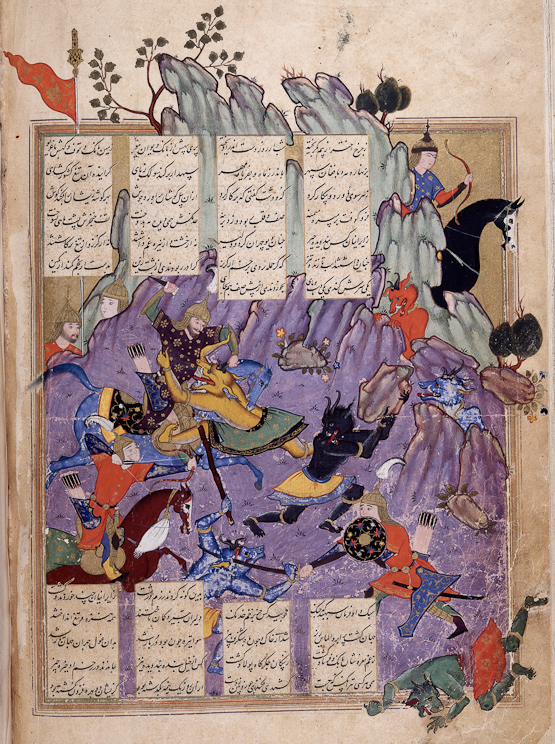 As the classic example of a Persian epic, the Shahnameh was emulated by subsequent generations. The stories of Bahram Gur and Azadeh No. 16 and of Alexander the Great (No. 10, No. 26, No. 39 & No. 59) were retold by the great Persian poet Nezami of Ganjeh (1141-1209). He, together with Jami (1414-1492) and Nava’i (1441–1501), transformed Alexander from an obsessive conqueror and usurper into a just and wise ruler, almost equal to a prophet. A series of poems imitating the Shahnameh in style, imagery and metre continued the narrative by filling in stories from the ‘Sistan cycle’ of the family of Rostam. The first of these was the Garshasp-nameh by Asadi Tusi ( c.1010–1070) [No. 74] . Such narratives were often incorporated into the copies of Ferdowsi’s original text. The idiom and inspiration of the Shahnameh was also appropriated to glorify the heroes of Islamic legend, such as Mohammad’s cousin and son-in-law ‘Ali.

The pure epic genre gradually went out of fashion by the end of the fifteenth century, giving way to versified romances. But the Shahnameh contained the embryo of various genres, including romantic, ethical and didactic literature. Figures such as Jamshid, the mythological Iranian king [No. 40] [No. 102] , became stock characters in later works, and his magic cup, the Jam-e Jam(shid ), which revealed the world’s mysteries to its owner, became a favourite Sufi symbol in classical poetry. The flavour for the epic а la Ferdowsi was revived under the Qajars (1797–1925) and the Bazgasht (‘Return’) movement that aimed to resurrect the great Persian classical tradition of the Golden Age. The Shahanshah-nameh (c.1810) of Fath-‘Ali Khan Saba was dedicated to Fath-‘Ali Shah Qajar (1771–1834). A George-nameh was written for George V’s visit to India in 1911. The king honoured the ancient traditions of Persian rulers in at least one way – in several weeks his passion for hunting decimated the tiger population of Nepal.

A fitting testimony to the enduring power of Ferdowsi’s verse and his gloomy vision of the decay of Iran’s glory is the poem by one of the most important twentieth-century Iranian poets, Akhavan-e Sales (1928–1990), also a native of Tus. In The End of the Shahnameh (1959) he associated the decline of his country with the loss of the values celebrated in Ferdowsi’s epic.