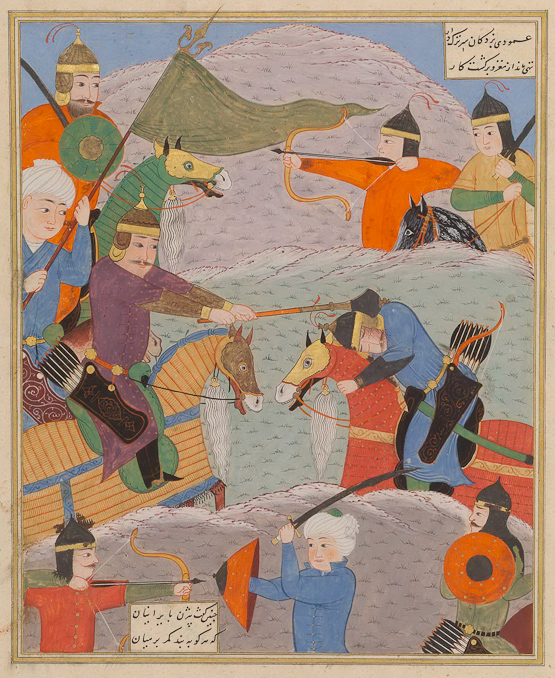 This scene is from the long episode of the ‘Twelve Champions’, which involves a series of single combats between Iranian and Turanian warriors. The encounter between the Iranian Bizhan and the Turanian Nastihan follows Bizhan’s first successful combat in which he killed Nastihan’s brother, Human. The Turanians retaliated by launching a night attack, but Bizhan meets the assault and kills Nastihan with a blow of his mace. The horsetails hanging from the bridles, a feature first seen in the late fifteenth century, may have served as protection against sword slashes. Unlike the earlier Timurid warriors, neither horses nor riders wear armour.

This image belonged to a manuscript that was produced in Lahijan at the court of the local ruler of Gilan, Soltan ‘Ali Mirza Karkiya, who gave refuge to the young Esma‘il Safavi (1501–1524), the future founder of the Safavid dynasty. It is illustrated in two distinct styles. The first resembles works in the Turkman style of late fifteenth-century northwest Iran. The second, seen in this example, is characterized by imposing figures with large heads, which have given the manuscript its nickname, the ‘Big Head’ Shahnameh.

It is now divided into two main parts, both in Istanbul, with some forty folios dispersed in other collections.