No. 40 Jamshid’s throne borne by divs 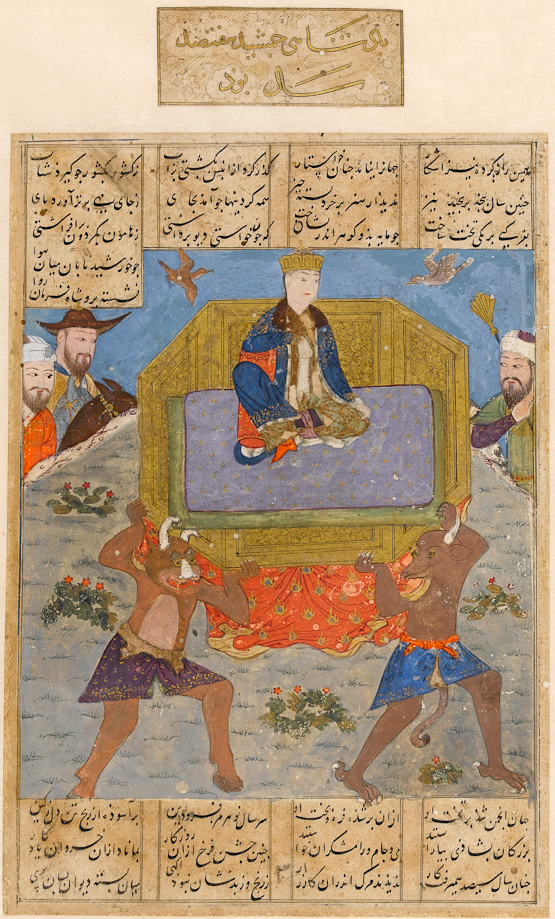 Jamshid, son of Tahmuras and the fourth Pishdadian king, was responsible for a great many inventions, from building in brick, mining and the manufacture of weapons to weaving, wine making and sailing. From the skin-clad followers of the first Iranian king, Kiyumars, humanity rose to a great civilization in Jamshid’s time, celebrated at the festival of Nowruz (New Year), which he inaugurated.

The ultimate expression of the king’s achievements was a jewelled throne carried through the air by divs (demons). Here, the artist has depicted the throne on land, but has incorporated the demons as well. Jamshid’s pride would lead to his downfall; he was driven from the throne by the usurper Zahhak.

Together with Nos. 7 and 10, this illustration belonged to a copy of the Shahnameh close in style to that produced for Ebrahim Soltan in Shiraz (Nos. 33, 34, 35, 36, 38 and 39). It may represent the independent efforts of his artists after his death in 1435 or the work of their pupils.