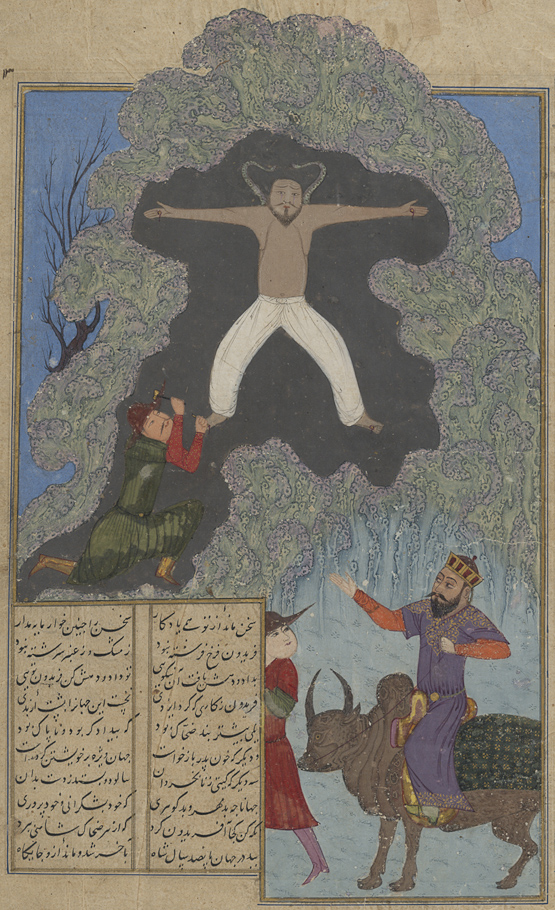 Faridun, the rightful ruler of Iran, defeated the evil Zahhak, who ruled tyrannically for a thousand years. Zahhak is seen here pinned in perpetuity to Mount Damavand, a dormant volcano, on the instructions of the angel Sorush. The mountain towers over the pictorial space, breaking through the frame. While the Shahnameh describes Faridun as riding a camel, here he is shown on an ox, a motif found in ceramics and metalwork (No. 29). The face of Faridun has been retouched in India. Together with Nos. 34, 35, 36, 38 and 39, this illustration belonged to a splendid copy of the Shahnameh commissioned by Timur’s grandson, Ebrahim Soltan (1394–1435), son of Shah Rokh, c.1430. Brought up in Timur’s imperial capital, Samarqand, in modern day Uzbekistan, Ebrahim was installed in Shiraz as governor of Fars for his father in 1415. When he died in 1435, the illustration of his manuscript was not yet completed, but it became a model for later copies of the Shahnameh.